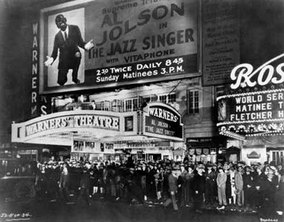 On October 6th of 1927, the Warner Bros. production THE JAZZ SINGER had its premiere in New York City. The first talkie with dialogue revolutionized the film industry and marked the end of silent films.

The story about the Jewish protagonist Jakie Rabinowitz, torn between tradition and modern spirit, and the success of the film are inseparably connected with the Jewish entertainer Al Jolson as he was the inspiration for the original play DAY OF ATONEMENT by Samson Raphaelson on which the film version is based upon.

AL JOLSON AND THE JAZZ SINGER, a feature documentary created by two graduate students from Germany, delivers an insight into the social and technical developments of the time, as well as into Jolson's background - the story of an entire generation of immigrants and their search for identity in the "New World" at the beginning of the 20th century.